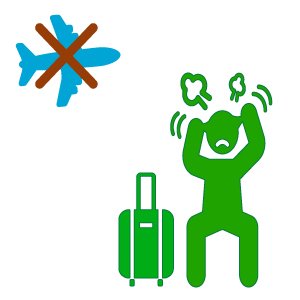 In the event of flight cancellation passengers are entitled to assistance and compensation (from € 250 to € 600) from the airline company of interest. There is no right to compensation in case the flight is cancelled due to “extraordinary circumstances”. Technical problems of the aircraft, poor aircraft maintenance or unavailable flight crew are not covered by the concept of “extraordinary circumstances”.

Regulation 261/2004, art. 5, establishes that passengers who were subject to flight cancellation* shall be offered PECUNIARY COMPENSATION and ASSISTANCE from the airline company of interest.

Passengers who were subject to flight cancellation shall receive compensation in the following amounts:

However, compensation is not due in case passengers:

There is no right to compensation in case the flight is cancelled due to extraordinary circumstances (which could not have been avoided even if all reasonable measures had been taken by the airline company) not foreseeable by the air carrier, such as bad weather conditions, strikes or for safety and security reasons. However, according to the Court of Justice of the EU, technical problems of the aircraft, poor aircraft maintenance or unavailable flight crew which lead to the cancellation of a flight are not covered by the concept of ‘extraordinary circumstances’.

Passengers can request a refund with reference to expenses which they have incurred as a consequence of the cancellation***.

See how to request a refund and/or compensation in the event of flight cancellation.

The airline company shall offer passengers:

In the event of cancellation of a flight the air carrier shall provide each passenger with a written notice setting out the rules concerning compensation and assistance, and the contact details of the competent body responsible for the enforcement of Regulation 261/2004, which in Italy is the Italian Civil Aviation Authority – ENAC (Reg. 261/2004, art. 14).

* “Cancellation means the non-operation of a flight which was previously planned and on which at least one place was reserved” (Reg. 261/2004, art. 2).
** “Final destination means the destination on the ticket presented at the check-in counter or, in the case of directly connecting flights, the destination of the last flight; alternative connecting flights available shall not be taken into account if the original planned arrival time is respected” (Reg. 261/2004, art. 2).
*** In case the airline staff is unable or refuses to provide care and assistance at the time of the delay, cancellation or overbooking, passengers have the right to personally organize care and assistance for themselves, keeping all receipts in order to prove the expenses, and ask the airline company to reimburse them at a later date.

Air carriers do not compensate passengers in case of security reasons or whose travel documents are not in order/correct/valid, nor do they pay the expenses for hotel, meals, drinks, etc. in case passengers re-schedule the flight at a later date at their own convenience.

**** Payments can be made by the airline company either in cash, by electronic bank transfer, bank orders, bank cheques or, with the signed agreement of the passenger, in travel vouchers and/or other services.