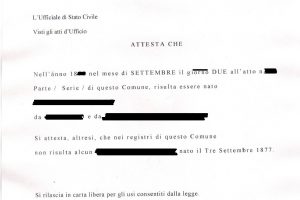 Positivo negativo letter
You are applying for Italian citizenship by descent (Jure Sanguinis) and so, after some research, you now know that one of the first things, if not the first one, you have to do is collect your Italian ancestor’s birth certificate.

Now, when you receive the birth certificate from your ancestor’s Italian Comune (hopefully with Vademecum Italia’s assistance) you are very excited and think you can move on. However, after checking it twice you immediately notice that your ancestor’s details do not match his or her details shown on his naturalization papers or death certificate or similar that you have collected in your country (US, UK etc).

For example, in many cases, if the Italian emigrant was born in a small town near a major city, he or she would often indicate to the US or UK clerk at his arrival the major city as his or her city of birth just to make it easier for the US/UK clerk to understand his or her place of birth.

You also have to consider that discrepancies in birth dates are also very common among Italian emigrants for a historical reason which happened especially in the South of Italy. As a matter of fact, in many Italian sothern Comuni, when a child was born his or her parents would register his or her birth many days after the birth as they were not always able to go to the Town Hall to register the birth immediately after it occurred. For example, Paolo was born on March 12, 1912 in Palermo, but he was registered by his parents on March 22. Then, due to the fact that they used to celebrate his birthday on the 12th, he always considered the 12th as his date of birth. So, he would use that date as his date of birth with the consequence that then all his foreign documents would show March 12, 1912 as his date of birth while the Italian Comune birth certificate stated he was born on March 22. This is clearly a discrepancy.

So, if you have a similar case to the one above, due to this discrepancy, you are reasonably worried that if you apply with the documents you have, your Italian Consulate may reject your application due to the different dates.

What should you do then?

This letter, which is commonly known as “positivo/negativo” letter, is usually accepted by Italian Consulates, and helps the applicant to prove the identity of his ancestor.

This is an exaple of a positivo/negativo letter

You need to know what to write in your request, to which office you should address it, and so, usually, a request that comes from an Italian attorney makes things easier and faster.

If you need assistance requesting this “positivo/negativo” letter from your ancestor’s Italian Comune, please send an email to citizenship@vademecumitalia.com and we will send you a quote for the assistance.